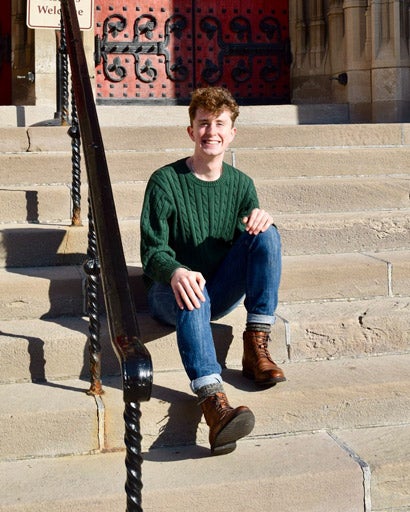 As a child, Dennis Doyle was surrounded by art.

“My home looked like a small gallery,” he remembers. Paintings by his mother and grandmother hung in each room. “Growing up, I dreamed to have my own artwork sit on the walls alongside theirs.”

He fell in love with science at a young age, competing in middle school science fairs and enjoying chemistry in high school. It was this love that guided his decision to pursue a chemistry major at the Dietrich School. He chose Pitt because it felt like home, and he “sensed that the Pitt community really wanted to support you to your goals.” This sentiment was one he had not experienced at other schools and has proven to be a defining feature of his undergraduate experience.

Despite choosing chemistry as his main focus, Doyle still planned to nurture his artistic aspirations by taking studio arts courses in addition to his science curriculum. These plans changed in his freshman drawing class, where his instructor, Department of Studio Arts professor Lenore Thomas, encouraged him to follow both of his passions. Upon this suggestion, Doyle decided to pursue a double major in chemistry and studio arts.

“Studying the two has been one of the best decisions I’ve ever made!” he exclaims.

His double-major may seem to some a marriage of unrelated subjects. But Doyle explains that at their cores, science and art overlap. “Asking questions, looking beyond the surface, and searching for the underlying truth is key in both fields,” he offers.

Illustrating how these fields can work together harmoniously, Doyle recently exercised his research skills as he developed new pieces of art. This spring, Doyle was awarded a London Field Study, through which he and a group of other students traveled to London to conduct research. Doyle’s project was focused on the term “safe space,” investigating the history of the term and using questionnaires to survey its modern interpretation. He began by collecting information around Pittsburgh on the subject. Armed with this information, he went to London to and visited art installations and architectural sites to gain insight into space creation. He says the process was “so informative,” and that he felt “lucky to walk away from that trip with great insights and even better friends.”

Most recently, Doyle has been looking forward to sharing his summer projects at the Department of Studio Arts Summer Research Exhibition in January and is focusing on a new project for his senior seminar course. He is branching out into performance, participation, and installation, and is planning on integrating all three of these features into his next piece of work.

In 2018, Doyle was named as a Beinecke Scholar. He was one of only 20 students selected from applicants from across the country for this highly competitive award. The scholarship was founded in 1971 by the Board of Directors of the Sperry and Hutchinson Company to support the graduate education of students of “exceptional promise.” The scholarship is designed to provide financial support so that students can select a graduate program with less of a financial hindrance.

“Just going through the application process was one of the most formative experiences in my college career,” Doyle says. “It really forced me to look inward and assess my goals, passions, and identity.”

The intense and lengthy application process for the Beinecke Scholarship requires advising meetings, an internal application, and passing a round of selection before being nominated. Pitt nominates one student for the award each year.

“Pitt’s nomination meant so much to me,” he says. “Having the support of the University behind me was such an honor and really validated that sense of community I felt on campus since day one.”

As he reflects upon his time in the Dietrich School, Doyle notes the breadth and quality of the education he has received. “The Dietrich School has supported me in pursing my passions, even when they don’t fit into a neat box. Every course, whether for my majors or general education requirements, has made me think critically and expand my horizons. I am so grateful for the diversity of experiences I’ve been exposed to and how it’s taught me to respect people from all disciplines and walks of life.”

In particular, Doyle appreciates the mentorship that he has received throughout his undergraduate career. He notes the impactful interactions he has had with Thomas, who encouraged him to pursue his multidisciplinary interests. In addition, Professor Delanie Jenkins, chair of the Department of Studio Arts, who he worked with for London and Wyoming field studies, taught him how to both perform research and “see the world through the eyes of an artist.” Judy Zang from the University Honors College was instrumental throughout the Beinecke application process and remained a source of support and encouragement afterward.

In addition, he credits close friends and family members for the support network he has had through college. “My college experience would be unimaginable without this amazing group of faculty, friends, and family in my corner,” he says.

The Beinecke award carries a $30,000 scholarship to support future graduate work. Beinecke Scholars are encouraged to pursue graduate education immediately following graduation, so Doyle is gearing up for his next transition. He is shopping for MFA programs, looking for an interdisciplinary program that will cover his diverse content interests and give him the freedom to work in a variety of different media.

As he looks to the future, Doyle wants to continue to pursue his varied interests. He aims to establish an academic career in which he can participate in multidisciplinary research.

“I really want my work to be relevant to my community. At the end of the day, if my work can have some change in someone’s life, I’ll feel achievement.”