Geology alum seeks to introduce the world to the night sky 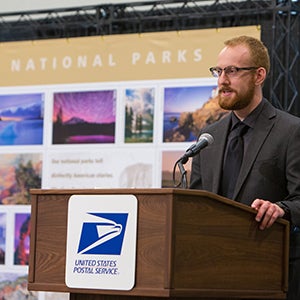 Matt Dieterich has a simple recipe for inspiration: Look up.

A lifelong astronomy buff, Dieterich is fascinated by the night sky, a phenomenon that appears over our heads each evening but goes largely unappreciated by most of us on the ground.

Growing up in Pittsburgh’s North Hills suburbs, Dieterich loved being outside, but his family didn’t really camp or hike. To feed his curiosity, he devoured books about astronomy and space, studying photos taken from the Hubble Space Telescope and tinkering with his own photographs. To him, sky and land were part of an outsized continuum of nature, a source of endless fascination, even when glimpsed from a distance.

So it is perhaps fitting that one of his photographs – a stunning portrait of Washington’s Mount Rainier, created from 200 images taken while the Northern Lights were visible in the night sky – appears as the 13th of 16 Forever Stamp images selected by the U.S. Postal Service to celebrate the centennial of the National Park Service.

“I grew up not knowing what a night sky was until I went to Colorado on a family vacation in 2008. I was 17 years old at the time,” he recalls. “I will never forget how excited I was to witness it. I was just counting down the hours until the sunset.”

And then, scattered above him in a spiral carpet of light, was the Milky Way. After that, he became addicted to photographing the night sky, and he was determined to find a career that would allow him to pursue and share his passion for the outdoors.

As an undergraduate, Dieterich worked for the Department of Energy’s National Energy Technology Laboratory in South Park. It was through there that he became connected with research funding for a graduate degree in the Department of Geology and Environmental Science, from which he earned an MS in 2015. The degree allowed him to refine his career goals.

“Grad school is not easy. I learned more about myself,” he says. “It gave me a little bit of insight into where I wanted to go with things.”

Initially, he thought he wanted to continue working in science research, but he began to feel a pull toward education, believing he could inspire and shape children who are, like he was, thirsty to learn about science.

“About 75 percent of Americans don’t live where they can see the Milky Way,” he says, because city lights wash out the sky too much for it to be visible.

By understanding the geology of the Earth, he notes, people are better able to understand similar processes that occurred on the moon or planets in our solar system.

By “trying to make little connections so they can relate to these objects,” he says, “that’s how we get people to protect the resource, when they feel it’s a part of them.”

He credits his graduate school adviser, Associate Professor Rosemary Capo, with motivating him to take an internship at Mount Rainier as part of the National Park Service Geoscientist-in-the-Parks program. He was offered the position as a first-year graduate student, but he declined at first.

Finally, the following year, he called and found the position was still available.

“She was supportive the whole way,” Dieterich says of Capo. “I was nervous. I had never been away from home for that kind of duration.”

Capo pointed out that he had talked about it for two years, and helped him to realize that “this is something that’s in my blood, that I really want to do.”

At Mount Rainier, one of his roles was to educate the public on the views of the stars and the effect of light pollution in densely populated areas. On June 22, 2015, he was working at the night sky program, and he noticed an aurora: a touch of pink from the Northern Lights, which Dieterich wanted to capture.

He drove down to Reflection Lake, where he saw a north view of the mountain and a reflection in the water. Between 2 a.m. and 4 a.m., he set his camera to automatically take 200 photographs. Since the Earth is rotating, each exposure revealed the stars at slightly different locations. He combined them into a single image, creating the appearance of a circular pattern of stars above the mountain against the otherworldly pink-and-purple hue of the aurora.

“It’s simple, and you have the mountain standing out against the Northern Lights background,” he says.

Two months later, his boss at Mount Rainier forwarded an email that said the postal service was looking for images that highlighted the National Parks for a series of stamps. Dieterich sent along the gallery from his website, www.mdieterichphoto.com, and the postal service selected his star-trail photo.

“I had no clue what it would turn into,” he says. When he realized people were interested in his images, he decided to sell them, hoping the photographs would one day hang in people’s houses, perhaps inspiring the same outdoor spirit he had cultivated as a child.

At the end of 2016, Dieterich will have completed a yearlong post-masters fellowship in geology research at the Department of Energy’s lab in Morgantown, West Virginia. After that, he plans to move to Victoria, Texas, and embark on a career teaching science to middle schoolers, with an eye toward eventually teaching high school.

He hopes to hang his night sky photographs around his classroom and encourage his students to find the treasurers hidden behind the city lights. He calls the decision to teach a “big leap moment,” a path to which Capo – and his graduate school experience – guided him.

“She made me feel comfortable with chasing that dream. She helped me take that first step,” he says. “That’s what I want to pass on.”