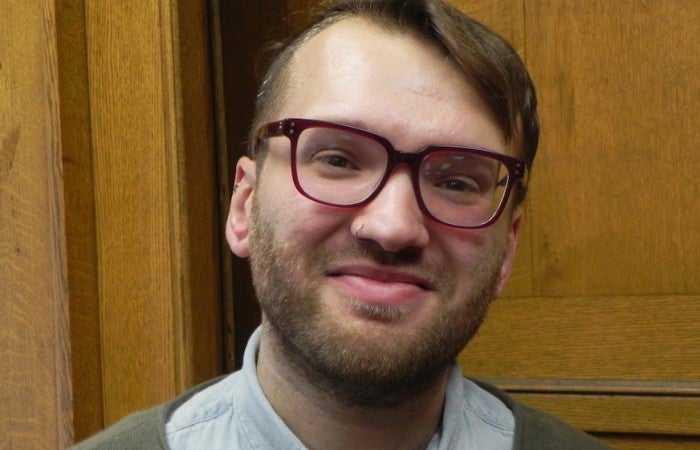 Examining the Intersection of Culture and Medicine

Ethnomusicology is a discipline focused on music-making as a product and force of culture—an expression and an action. Ethnomusicologists study music as a means of social engagement in all contexts: political, economic, preservation, and within science and medicine.

Steven Moon, a doctoral student in the Dietrich School’s Department of Music, said he became an ethnomusicologist because, “it provides me with the tools to study music as a critical social and political force in our daily lives.”

Trained as a classical cellist, Moon as an undergraduate gained experience with anthropology and history, including a study abroad experience in Turkey during a civil uprising, motivated him to study the social and political applications of music.

“I began to understand music in a new way,” he says. This led him to pursue graduate research on music and culture.

Offers Moon, “My master’s thesis, written on music, gender and identity amongst young gay men living in Azerbaijan, encapsulated many of my interests that persist today: gender expression and performance; corporeality and our experiences of ‘having a body,’ so to speak; and the uses of technology in supplementing or altering phenomenological experience.”

Now focused on completing his PhD, Moon’s current research is focused on music, medicine and healing. He examines the revival of Ottoman musical healing in Turkish biomedical research and investigates how humans understand health and perceive wellness in light of cultural influences like religion, politics and community.

Music as a therapeutic treatment was introduced to Turkey during the late Ottoman Empire, Moon explains, where it became popular in wealthy urban areas.

“Other healing traditions—things like cupping and leeches—of course persisted and are today being seen again in state clinics,” he says. “Musical healing follows a similar trajectory, particularly amidst a resurgence of interest in the Ottoman era … It has rapidly evolved, and is now used in a variety of medical contexts: Alzheimer’s and dementia, pain management, psychotherapy, etc.”

“This project continues the work done by others in the fields of medical ethnomusicology/anthropology and feminist science studies of deconstructing the notion that biomedicine is an entirely objective field free from culture and politics,” he explains, stating that his current research is in line with two common threads in the field. “One, we don’t really know, on a biological level, how music actually helps—we just know that does—and two, a lot of the research assumes that music’s effect is on the mind and that the mind is still separable from the body.

“What I find so fascinating in a lot of the Turkish research,” says Moon, “is that there are physicians really modeling an escape from this dualism and working towards a research model that allows for music to be understood as having an effect on the body as a whole.”

From June 2019 to March 2020, Moon, a Fulbright scholar, had been living and performing his research in Istanbul, Turkey. Then the COVID-19 pandemic forced him to return home. He says the time spent abroad has been invaluable. After six weeks in the Aegean region learning Ottoman Turkish through study funded by REES, the University's Center for Russian, East European and Eurasian Studies (lessons in Ottoman Turkish, the old language of the empire, are “incredibly difficult to find outside of Turkey,” says Moon.), Moon spent his time researching, taking music lessons, and visiting archives and special collections.

“Much of the historical material I am dealing with is only available in-person, so I had to be in Istanbul in order to view it and get copies for myself,” he explains. “Ethnography is, of course, most effectively done in person: Talking to people in the environment where they work and live, physically being there myself and demonstrating my own passion and interest for what they do, those things foster a rapport and relationship. This type of work is just not possible to do remotely, not in the same way, anyway.”

Moon grew up in the suburbs of Pittsburgh and chose Pitt for his graduate education because he enjoys the city and appreciates the support and resources available to him in his department.

“The Department of Music at Pitt is close-knit and incredibly lively, particularly for its size,” he explains. “I appreciate that I know every one of my classmates and have had a chance to work closely with almost every faculty member. Our students and faculty collaborate across disciplinary lines, which has pretty fundamentally shaped my work and who I am as a scholar.”

“Working with Dr. Helbig has been one of the most rewarding parts of my time at Pitt, and I am thankful for an advisor who not only has supported my wandering mind, but also whose interests have grown and evolved in ways that influenced me greatly."

While his early work was made difficult by the civil uprising in Turkey, and COVID-19 has complicated his current research, Moon says the Dietrich School has always supported his work and research endeavors.

“I rarely felt unsupported in pursuing whatever I could, whatever I wanted, at that time,” he says. “Now, amidst COVID-19, my Fulbright fellowship came to an unfortunately early end, and I returned to Pittsburgh from Istanbul, but I am still finding there are resources available to me. I value that support a lot because it certainly was not universal across the many graduate programs I applied to.”

Despite his early return from Istanbul, Moon’s months in Turkey were fruitful. In interviews with physicians, he unexpectedly found that some very strongly believe in the therapeutic efficacy of Ottoman musical healing.

“People always ask me, ‘Does it work?’ And my answer is always, ‘That question doesn’t interest me, my dissertation isn’t about me saying ‘yes’ or ‘no.' But my dissertation is about what these researchers say, and many of them believe strongly that, yes, it does work in precisely the way the Ottomans said.”

In Focus: Examining the Intersection of Culture and Medicine

Close Up: Building a Bridge for Water Research