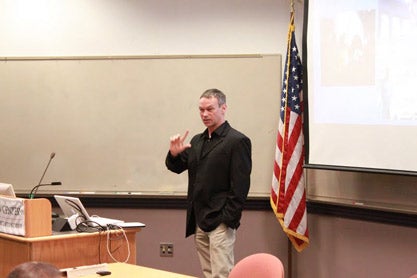 Milwaukee high school exchange student Randall Halle was convinced he had just walked into a postcard. Nestled into the majestic hills at the southern tip of Germany’s Black Forest, the town of St. Blasien appeared nearly untouched by the modern world. This would be his home for the next semester as he studied at Kolleg St. Blasien, a private prep and boarding school considered one of the most prestigious schools in Germany.

Halle was in Germany with a group of students from his high school, along with their German teacher, Dr. Sylvester Kreilein, who helped organize this once-in-a-lifetime trip.

Dr. Kreilein was a larger-than-life figure for Halle and his peers. A man who looked like a young Karl Marx and wore his Birkenstocks everywhere (even in the dead of the harsh Wisconsin winters), Kreilein encouraged his students to seek new experiences. In particular, Kreilein loved foreign films. He would take his classes to downtown Milwaukee’s Oriental Theatre to watch subtitled films by Herzog, Fassbinder, Wenders, Schlöndorff, von Trotta, Sander, and other pioneers of New German Cinema. He also organized the exchange student program between Halle’s high school and Kolleg St. Blasien.

Halle flourished in St. Blasien. Hiking in the hills high above town, listening to the bells of the magnificent domed Cathedral of St. Blasien, taking coffee and cake each Sunday in his German family’s music room while their daughters played chamber music, speaking more German than he ever thought he could—Halle began to see himself and the world in new ways. Where before he found it hard to look past the day-to-day minutiae of his suburban life, now there were possibilities as far as the eye could see.

“It brings me great pleasure to write a letter on behalf of …,” types Randall Halle quickly.

It is that time of year again (fall), and Halle has no fewer than 50 recommendations to write, in between undergraduate and graduate students and colleagues applying for fellowships, tenure, or promotions.  Put that together with his typical workload as Klaus W. Jonas Professor of German Film and Cultural Studies at the Dietrich School of Arts and Sciences, and Halle can barely manage his e-mail inbox lately.

That said, though, Halle gains special satisfaction from working with students, even when his mentoring role takes him into the wee hours of the morning. He knows how vital a teacher can be in helping his students develop their true identity.

His biggest hope for his students is simple, but profound: “I hope that I can help each of my students become more of who they already are.”

Halle himself is special breed of scholar and professor. He is one of a growing number of Pitt people who transcend boundaries between different, but related, fields of study on a daily basis. He came to the University in 2006 from the University of Rochester, attracted by the opportunity to be the inaugural holder of the Klaus W. Jonas Chair.

“It presented a unique opportunity to become a key member of the dynamic programs that make the intellectual life at Pitt so invigorating: the German department, of course, but also film studies, cultural studies, women’s studies, European studies, and global studies,” says Halle.

Halle has made good use of his time so far at Pitt as the Jonas Chair, organizing two major conferences (“Interzone EU: Crossroads of Migration” and “After the Avant-Garde: European Experiments with the Moving-Image”); conducting film series; playing foundational roles in new units at the University (he was on the initial steering committee for the Humanities Center); helping shape curricula; and fostering graduate students (he is director of graduate studies for his department). Halle has also reformed the German curricula at both the undergraduate and graduate levels and spearheaded a degree program between the German department at Pitt and the University of Augsburg.

In addition to his leadership duties, Halle maintains an active research life. Throughout his career, he has published extensively on questions of nationalism, globalization, gender, sexuality, and minorities. He is currently working on several books. Interzone Europe: Social Philosophy and the Transnational Imagination looks at the way film plays a unique and fundamental role in the European Union.

“Where print media once served the emergence of the nation-state, in Europe now it’s film through which the transnational community is imagined,” explains Halle. “The EU devotes significant funds to foster audiovisual production. It constructs a European public, watching European stories. It provides a venue to seek answers to tragedies and to celebrate accomplishments. Images from Spain fascinate audiences in Poland, and stories from Bratislava are told in London.”

Halle’s interest in and research on film made him a natural choice when the University recently convened a steering committee to launch a new PhD program in film studies.

“Pittsburgh has a world-class film program already,” says Halle. “My colleagues in film have played key roles in defining film studies. The new PhD brings those people who were spread across departments together in an even more directed fashion, creating a PhD in film that certainly need fear no rivals.”

Halle’s other two books in progress—Visual Alterity: Seeing Difference and Migrant Debates examine alterity (a philosophical term meaning “otherness”) in film and other visual media, and the dynamics of what Halle terms the “transnational working class,” a group that, in today’s era of globalization, migrates around the world.

It is this kind of creative, multidisciplinary work that won Halle the 2010 Fulbright Senior Research Grant, allowing Halle the opportunity to complete research in Berlin.

“The award attests as much to the respect the University of Pittsburgh has in the academic world, as to my research proposal,” says Halle, who kept in touch with his Pitt colleagues and students from Germany, Skyping in on exams and advising meetings.

When asked to consider his career and workload, Halle hesitates. “It is hard for me to say when I am not working,” he muses.

“When I watch a film or read, it is typically something I could also treat as research. When I go to a museum, when I spend summers in Germany—these are all pleasurable and yet also contribute to my research.  When I am advising, writing letters, attending meetings, these are forms of service I do to help the profession and develop a stronger academic community.”

To learn more about the Randall Halle and his work, visit www.german.pitt.edu/people/halle.php

Photo courtesy of the Mershon Center for International Security Studies