Translating a passion for language into the power of words 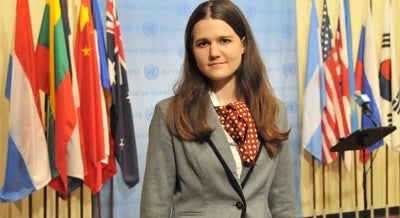 Joelle Metcalfe has to pinch herself some days. She will be walking down a hallway for a press briefing and run into a high-level foreign policy official—someone who, until a few months ago, she would have only encountered on the pages of the Economist, Foreign Policy, or Foreign Affairs (magazines she has subscribed to since she was an undergrad at the University of Pittsburgh).

"As someone who had been concentrating solely on northeast Asia for the past couple years, I had to learn fast about the recent events in the Middle East and Africa and get on top of the history behind these issues while the crises were still unfolding," says Metcalfe. "It may sound hectic, but I enjoy keeping fresh on different issues at a rapid pace."

Metcalfe is tested daily in her position as she works to cover complex issues accurately and insightfully. She has to understand a wide range of national stances on issues, as well as keep up with multiple drafted resolutions on varied topics.

And, she challenges herself to keep her journalistic integrity, reporting without the unconscious bias that can come with the beat.

"The UN community can feel like a bubble sometimes, and the longer you stay, the harder it becomes to communicate to regular people why this news matters," says Metcalfe. "There's the danger of becoming too comfortable—of just nodding, taking it at face value, and calling it a day. But the story behind the statement or decision is what's much more interesting and harder to crack."

Metcalfe has never had trouble challenging herself. As a Pitt freshman, she would listen to Nikkei and NHK (Japan's national public broadcasting organization) news podcasts in Japanese on her bus commute from Pittsburgh's North Hills to campus to hone her listening skills—while most of her peers were zoning out to pop music or texting friends.

At Pitt, Metcalfe distinguished herself, earning spots in the National Society of Collegiate Scholars, the University's Dean's List, and Pi Sigma Alpha Political Science Honor Society. She won a Bridging Scholars Study-in-Japan Scholarship in 2009 to Ritsumeikan University in Kyoto, an experience which solidified her love of all things Japanese and her resolve to pursue a career in East Asia.

As she neared her senior year at Pitt, Metcalfe consciously chose to forego the typical path of teaching English in Japan and instead planned to take the entrance exam to a Japanese university for her master's degree.

She knew this would be no small task, so she crafted her undergrad capstone at Pitt to demonstrate proficiency and show her depth of knowledge on the subject that would eventually become her master's thesis.

"I wanted to research what it meant to have political leadership in Japan," explains Metcalfe. "Pitt has one of the largest East Asia libraries in the country, so I spent a lot of time at the Hillman translating pieces of political memoirs, commentary, and dialogue."

Her strategy worked. Metcalfe returned to Japan in 2011—this time studying at Waseda University—the country's top private institution. While at Waseda, Metcalfe intentionally decided to broaden her horizons beyond Japan, studying North and South Korea, China, and South Asia, including a study abroad stint at Peking University in Beijing. She also interned for a number of foreign policy-related organizations, including a Washington, DC, think tank, the U.S. government, and the United Nations in China. She also freelanced for the Japan National Tourism Organization and the Wall Street Journal's Tokyo bureau where she wrote a number of articles for their Japan Real Time blog. In 2013, Metcalfe earned her master's degree from Waseda in foreign policy, concentrating on East Asia-U.S. Relations.

While she enjoys her current reporting position, Metcalfe is already looking ahead. Because she intentionally interned in each of the sectors related to her field of study—diplomacy, think tank, journalism, and international organization—she has an excellent vantage point to consider her options.

"Each sector has very appealing points, which makes for a tough decision," Metcalfe says. "Journalism is the most fun, but competitive; think tanks are the most comfortable but eventually require a PhD; diplomacy is the most sensitive and difficult to enter, but the most prestigious."

While it does not fit as neatly into her résumé as her internships, Metcalfe also has another impressive credential to add to the growing list: three-time NaNoRiMo Winner.

Short for National Novel Writing Month (November 1-30), NaNoRiMo is a nonprofit that provides encouragement and support for writers, who are challenged to write a 50,000-word novel by 11:59 p.m. on Nov. 30. Winners complete the task, and Metcalfe has done so in 2012, 2013, and 2014. She terms her novels "light fantasy" and says they include elements of diplomacy and state power, themes she encounters often in her work life.

Perhaps Metcalfe can add "author" as yet another option to her career list.