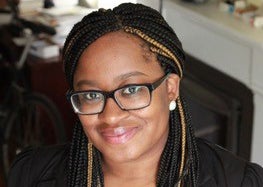 Keisha N. Blain, an associate professor in the Dietrich School’s Department of History, works to preserve and share stories focused on race, gender and politics. This year, in collaboration with fellow historian Ibram X. Kendi, she released the book "Four Hundred Souls: A Community History of African America, 1619-2019," a massive community history that covers 400 years of Black America.

“In 2018, Ibram shared with me his idea to commemorate the 400-year mark of captive Africans first arriving in Jamestown in 1619,” said Blain. “He invited me to work with him on this monumental project, and I agreed to do it because I immediately saw the need to mark this pivotal moment in our nation’s history.”

The work is divided into 10 sections, with each focusing on a 40-year period. Blain and Kendi edited and coordinated a team of 90 writers; 80 writers covered every 5-year span, and 10 poets contributed an original poem to the end of each section.

“This allowed us to effectively cover the 400-year timeline while exploring a wide range of events, themes and figures from Black History,” explained Blain. “We chose to feature short essa—the length of op-eds—to ensure that the pieces would be accessible to all. Ibram and I want "Four Hundred Souls" to serve as a primer for people with little background knowledge of African American history. And the roster of contributors creates an extensive bibliography of further sources to seek out for more in-depth looks at the topics we cover.”

Blain also noted that it was important for the book’s format to be practical for use in the classroom and to facilitate in-class conversations.

She said one of the biggest challenges of editing "Four Hundred Souls" was coordinating across the many contributors and topics. To select authors for the book, Blain and Kendi narrowed down a long list of contributors, making sure to maintain a strong representation of women writers and non-historians such as creative writers, philosophers and journalists.

“Putting together the project was certainly difficult, but Ibram and I were encouraged by the enthusiastic support we received from the contributors. I was pleasantly surprised by how much I learned about African American history in the process of editing the book. Some of the essays in the book covered aspects of the history that were new to me and even introduced me to lesser-known historical figures.”

Ultimately, Blain hopes, readers will see Black History for all its rich diversity and complexity. “When Ibram and I set out to create this volume, we wanted the final product to reflect the many voices of Black America. And I think the themes presented in the book will resonate with many of the current struggles against the entrenched racism in American culture.”

Indeed, racism and racial issues have recently escalated to a major subject of reflection, activism and conflict across the United States. The social climate and concerns with race, social justice and inequality had an impact on the development of "Four Hundred Souls," as it did for many aspects of American life.

“The discussions Ibram and I had at the start of working on "Four Hundred Souls" were certainly informed by the current social climate, especially the Black Lives Matter movement and the Trump presidency,” explained Blain. “We saw the book as an important way to commemorate the Black freedom struggle since 1619. But this impact took on new dimensions when we were finishing our work on the book in the midst of a global pandemic and the uprisings this past summer. As I wrote the conclusion for the book, I spent a lot of time thinking about these developments. I worked to capture the history while also considering how we can continue the fight for Black liberation in the next 400 years.”

"Four Hundred Souls" was released to resounding praise during Black History Month this year and topped The New York Times Bestseller list. Most recently, Blain has shifted focus toward her newest work, "Until I am Free," which is set to be released on October 5, 2021 by Beacon Press. It details the life story of Fannie Lou Hamer, a Black activist and political leader from Mississippi who has inspired Blain for years.

“Ever since I first examined her ideas and legacy as an undergraduate student, I have drawn inspiration from her example,” Blain said. “As I looked back over the past decade, I reflected on the rise in racist violence, police killings, protest movements, restrictive voting laws, and so much more. It occurred to me that Fannie Lou Hamer’s political ideas and philosophies provide a roadmap for today’s activists as we work to build a more just and equal society.”

As a historian, Blain says she and her colleagues have an important role to play in situating current movements within a broader history.

“For example, historians have an opportunity to provide that backdrop and context to movements like Black Lives Matter and recent calls to ‘defund the police.’ There is a tendency to imagine that these efforts are ‘new,’ but the study of history helps to reveal how these recent developments are deeply tied to earlier moments in our past, including the Civil Rights-Black Power era,” said Blain, emphasizing that historians have a responsibility to interpret the past for their generation.

“I think that form of engagement is necessary to help provide context for the current moment. In the realm of national politics, the current debates around the filibuster, for example, should be informed by a historical understanding of its role in blocking civil rights legislation. And the racial inequities exposed by COVID-19 are products of a larger history of medical racism. Historians can help to draw those connections for others. More importantly, I believe that the onus falls on me as a historian to produce the kind of scholarship that can be educational tools for anyone committed to social justice. I recognize that not all historians feel this responsibility, but it’s certainly one that is important to me.”

Portrait: Grateful for Past Opportunities and Mentors, Alumna Pays it Forward

In Focus: An Eye to the Future: Research on Fly Eyes Helped Prepare Undergrad for Medical School