As a young undergraduate studying electrical engineering in Turkey, 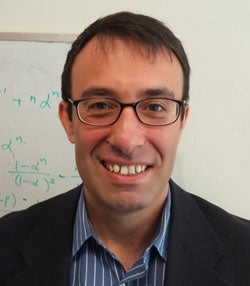 Utku Ünver never imagined that he would wind up using his interest in economic theory to solve life-changing societal problems. But when those opportunities found him, he was prepared to make a difference.

Truth be told, Ünver initially did not even know he would be an economist. A strong student, he wanted to earn his doctorate, but his undergraduate experience was enough to convince him that engineering was not his true passion. He earned a master’s degree in economics, and when he searched for a place to pursue his PhD, he found an unorthodox home—and a faculty ripe with mentors—at the University of Pittsburgh.

Then considered to be up-and-coming, Pitt’s Department of Economics was home to several top-flight researchers who encouraged their students to ignore disciplinary silos and attempt the unconventional.

“Its focus was very much on experimental economics; it was not very mainstream at the time,” Ünver recalls. “I wanted to do economic theory, so it was a difficult transition for me, but I was exposed to something new.”

Ünver’s mentors challenged him to find new ideas and applications for his research, rather than study several interations of the same problem.

“It was an eye opener for me: Economics is more than just supply, demand,” Ünver says. “Until I came to Pitt, I thought there were all these well-established theories and you did research according to [them]. I never thought you could create a new field.”

Ünver credits that early push outside his academic comfort zone with some of the inspiration that influenced his work in market design, applying theories to design real-life markets with practical applications. One of his PhD mentors was Alvin Roth, who would go on to win the 2012 Nobel Prize in Economics jointly with Lloyd Shapley for the theory of stable allocations and the practice of market design.

Under Roth’s tutelage, and later under John Duffy, who now directs the Pittsburgh Experimental Economics Laboratory, Ünver worked on the problem of two-sided matching markets; for example, the job search process for doctors, which matches interns in a centralized market. He explored factors that influenced an intern’s success or failure, winning recognition for a paper on the topic at a competition Duffy encouraged him to enter.

That work prompted Ünver to study effective designs for creating good market clearinghouses: When a transaction requires a centralized market, how should it function?

After graduating in 2000, he returned briefly to Turkey, then came back to Pitt to teach before moving six years ago to Boston College, where he is a professor of economics. In his professional life, Ünver has found several high-stakes scenarios in which he can use his work. For example, he applied matching theory to unite transplant recipients with compatible donor kidneys, work on which he collaborated with Roth and Boston College colleague Tayfun Sönmez. The result was the New England Program for Kidney Exchange, formed in 2004, and the Alliance for Paired Donation, created with Ohio medical specialists in 2005. The latter was nominated for the 2014 INFORMS Franz Edelman Prize, the most prestigious recognition for excellence in applying advanced analytics to benefit business and humanitarian outcomes.

“That’s a big honor, even though I’m not an operations researcher,” said Ünver, but his educational foundation in the unbounded approach to economic theory helped him view problems through a cross-disciplinary lens.

Other projects include a collaboration with colleagues at Carnegie Mellon University on improving a government clearinghouse database that matches children with adoptive families in Pennsylvania. He also studies matching markets as they apply to tuition-exchange programs in colleges and school-choice programs in public secondary education.

The tuition-exchange programs focus on a common benefit that colleges and universities offer employees: free tuition for their children. Sometimes, students can apply that waiver to other universities in an exchange, but in order to work efficiently, the program needs some centralized coordination to ensure enrollment balance among the institutions.

“In the end, it became more of a social kind of agenda,” Ünver said of his work, though not by design; because of his interest in matching theory, those problems found him. He believes the ability to witness tangible results has helped him avoid the burnout that can plague economists whose work remains largely abstract.

“I feel blessed, in that sense,” Ünver says. “I feel this kind of concrete outcome makes me more dedicated to my research.”